A downloadable game for Windows

The world is afflicted with a mysterious disease known as "The Enigma."
Chester, infected with this disease, finds himself washed onto a lonely island, Carlyle.

As he is being given a tour of the island by the girl who nursed him back to health, Chester finds himself feeling that something is off.
There are no doctors from the mainland. Not only is there no information of the outside world, but the inhabitants seem entirely oblivious of the worldwide epidemic.
---It's as if this place has been completely removed from the rest of the world.

After a while, Chester finds a conspicuous white forest in the middle of a green expanse.

"That forest devours people. That's what I believe."

The forest's name is Enigma.
The same as the disease consuming his body.

In order to download this game you must purchase it at or above the minimum price of $13.99 USD. Your purchase comes with a Steam key. You will get access to the following files:

This is by far one of the best visual novels out there. I got it for free during the giveaway a month ago, but after finishing ended up donating $25, something I've never done before. Thank you, Uzumeya, for this brilliant gem, and thank you, Fruitbat Factory, for bringing Enigma to the English-speaking market!

Enigma is most definitely worth it for fans of original epic fantasy, character-focused stories,  well-done friendships, and handsome men blushing cutely while saying how happy they are to be friends.

The story premise is this: Chester, the main character, is dying. And the choices he makes will determine whether he will inspire those he leaves behind to grow and mature, taking strength from their memories together... or not.

For maximum impact, enter your real name when prompted at the start of the game. This does not affect Chester's name (he is very much his own person), but is used in a very original way at one point in the story (and no, it's not for cheap doki doki horror).

-Good pacing throughout - no bloating or padding of the plot

-Great art that conveys both emotional and horrifying moments

-Endings that aren't compulsory to unlock more routes in no way feel tacked on (caveat, see cons). Some bad endings can be horrifying, but even at their worst, it never felt like they were there just for the sake of it (CAVEAT, SEE CONS), but rather to show the consequences of one's choices (e.g. route 1, end 4, route 2, end 6), and provide a different perspective.

-The ending's emotional impact definitely lived up to the rest of the visual novel.

-COLETTE. I seriously think the developers may have added her to trip up anyone expecting a waifu-dating vn.

.Which is why someone should really gift this game to a waifu-dating vn lover. Then watch them go through route 1, only to get end 6. (Or  even worse, end 7.) Preferably filming the whole thing.

The developer, Uzumeya, has also released a series of 3 visual novels called Lost Friends. They seem to continue the main themes of friendships and sad deaths, and I am definitely willing to contribute to any Kickstarter trying to get them translated.

I have to ask though, who is the woman with the Envirio-like branches in the closing video? I kept wondering if she was a grown-up Envirio or something, but Envirio's at the bottom of the picture.

This game is awesome, if only they had released full in-game OST than just the 2 tracks in mini OST.

I think they used Royalty free music, I heard one of the tracks in the game that is the same as one from Monster Girl Quest of all games lol Umi2 ~

There's an OST available from BOOTH by the developers:
https://uzumeya.booth.pm/items/370558

Thank you~ I checked out the music, they are still missing music they have in game that is not included, I still believe they used some Royality Free Music in there. I really like to know what they used, I would appreciate it any info on that.

Finished all in one siting. Really enjoyed this VN!

Just wanted to say that this is one of the best VNs I have ever played. Art and story are A++ I hope someone will translate more of Uzumeya's works because I only understand a little bit of Japanese TT_TT

Thanks for making this game free.

Got a question. So, the main character that we're playing is Chester, but the characters he interacts with are also boys, so is this BL or does this VN not contain romantic content?

It doesn't adhere to easy to define genres, but it's somewhat written at female audiences (direct comment from developer's homepage) and there's a fair bit of male bonding.

He means that females are more likely to enjoy it.

I just beat the game like hours ago but i have to ask will there be a sequel to this. The epilogue kind of hint of a new story If you know what i mean...

Glad to hear! The story is self-contained and there is no sequel planned.

Oh that unfortunate :(  The game was so good that im craving for more but thax.  ^_^ 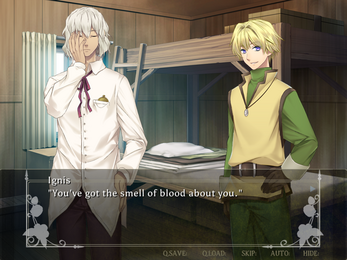 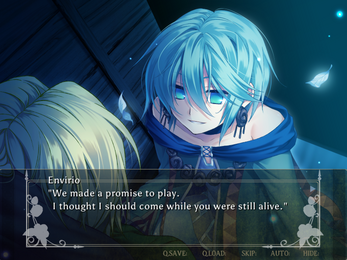 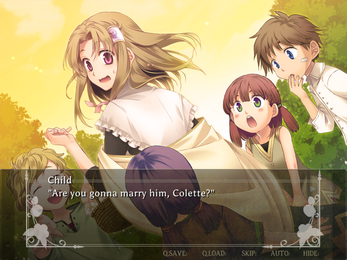 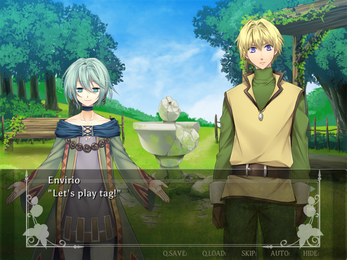 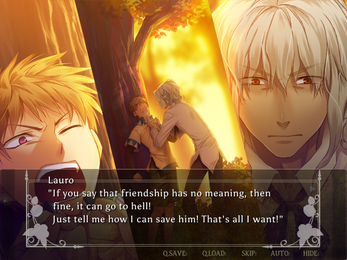